Jim Jones was well known as a remarkable painter of Zion Canyon, the Grand Canyon and the Colorado Plateau. A Utah native from Cedar City, Jim enjoyed a lifetime of intimate exploration of his favorite subject: the expansive landscapes and dramatic canyons of this desert country.

This award winning documentary was begun in 2008 when SUU communication professor and video producer Jon Smith and SUU English professor and author James Aton met with Jimmie Jones to determine if he would cooperate in the production of a video documentary about his work as a landscape painter. Aton had previously written an article about Jones in 1985, and they had remained friends. During 2008 and 2009 Smith videotaped multiple interviews and segments at Jones’ home in Rockville, Utah, in Zion National Park and at other southern Utah and northern Arizona locations. Jimmie died on December 5, 2009 and was buried in Springdale, Utah on the same day his final show “Recent Works” closed at the Braithwaite Fine Arts Gallery at Southern Utah University.

Purchase a copy of the DVD

Here is a small sampling of Jimmie’s paintings from his last exhibit at Southern Utah University. All rights reserved. Images may not be used without permission.

Waterfall at the Temple of Sinawava 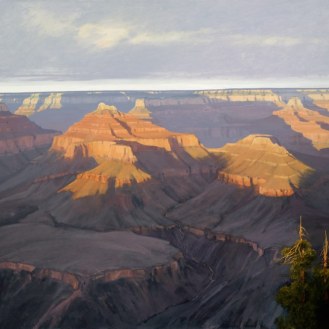 Snow on the Great White Throne

Jimmie Jones left his last 14 paintings and his Rockville, Utah home outside of Zion National Park to Southern Utah University to help fund the university’s museum of art: SUMA.